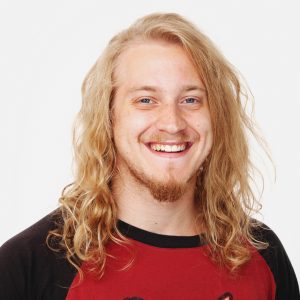 Please introduce yourself to prospective students!

Привет! Howdy! My name is Jake Pflughoeft, but you can call me “Pflugey” (floo-gie). I am a junior studying Russian, English, and German with the goal of becoming a teacher. The very first class I had at UW-Madison was a Russian course. Early on in my first year, I was able to find a community that I wanted to be a part of. Before starting Russian, I never imagined devoting such a part of my life to the things of a world so far away from my own! I would love the chance to help anyone find what they are passionate about. I am interested in languages, poetry, old video games, and helping people.

How have your Russian language skills changed since joining the Russian Flagship Program?

As I mentioned, I have learned all my Russian from my time at university. The program has helped me get more comfortable with speaking Russian among other things. Because I was meeting with two separate tutors on a weekly basis and speaking primarily Russian, I felt able to try all the things I was afraid to say in class. The extra help made a significant difference in my confidence. Additionally, my trip abroad, which was made possible due to Russian Flagship scholarships, put me at a much higher level than I could have achieved in an English-speaking environment.

What are some of your favorite aspects of the Russian Flagship Program?

The Russian Flagship Program sets you on a journey. This path is offered to others with similar interests. As you delve deeper into the Russian language, strong connections form with the people around you. Having friends who are, for example, struggling with the same eight-credit intensive summer course makes a huge difference. Not only do you get closer to the people in the classroom with you, but the whole department becomes a second home. It’s such a welcoming environment that there have been times I’ve gone up to the upper floors of Van Hise just to hang out and speak some Russian. The people around you become more than a community. They become your family.

Why is a professional level of proficiency in Russian important to you?

Reaching a professional level of Russian is very important to me. At this point in my language acquisition, I can speak conversationally. However, I greatly desire to achieve a higher level of proficiency. At some point in my life, I would like to teach Russian to native English speakers. In order for me to feel comfortable doing this, I want to be almost perfectly versed in my third language. Also, I love Pushkin and being able to understand what he and other poets have written without a translation is a goal of mine.

What advice do you have for students who are considering the Russian Flagship Program?

If you’re on the fence, just try it! Unless you have a remarkably rigid schedule, college is the time to try new things that interest you. I took German in high school and had absolutely no inkling towards Russian whatsoever when I originally signed up for classes. However, I took my Slavic 101 course, and now I am able to communicate with an entirely new group of people. I didn’t expect to love a language so much and I never would have found out if I hadn’t tried something completely foreign to me.